Added tiling on denoiser. This is perfect for renders with huge resolutions, as may need a lot of memory and even crash. With tiling it can manage big resolutions, but denoising time is a little big longer. Good news: it's up to you to use it.

(UI can change on final release)

luis.hijarrubia wrote: ↑
Wed Sep 16, 2020 10:17 am
We have planned a 5.1.2 patch for September, but we are not going to release it. The main reason is that we updated to Cuda 11 in order to support RTX 3000 series. The thing is that Cuda 11 no longer supports Windows 7 and 8. So we have to make 2 windows versions of maxwell, one for Windows 7,8 with Cuda 10, and other one for Windows 10 with Cuda 11. We were not comfortable doing this with a patch, we prefer doing it on a proper version. And we need to work on portal to allow having more than one windows version.

So, we are skipping 5.1.2 and going ahead to 5.2, that will be out in 2 months. With 2 windows versions. We will be posting the features of 5.2 in this thread when we can show them working.

I want to be really straight forward in quoting and comment your decision.

Considering the low communication we had in the past especially with V4, and the incredible resources literally wasted by the old team behind the V4, maybe a direct confrontation could bring some positive ideas.

Maxwell render is a rendering suite dedicated to Professionals using mid-high range hardware, and considering the recent exponential hardware evolution, a base requirement has to settled up in minimum requirements both for hardware and software.

Personally a Windows 10 / Pro 64 bit version has to be the minimum requirement. Speaking of Windows environment of course.

2) LACK OF CPU PERFORMANCE
Maxwell Render CPU performance in a rendering environment need a huge rework to improve the performance per Cores/thread/frequency.
Especially with a wide variety of AMD threadripper cpu available on the market.

Actually Maxwell render could bring more performance within cpus like the old 2990Wx, 3970x and even 3990x.
And Zen3 is coming soon so..

3) AMD GPU SUPPORT
with the upcoming Big Navi AmD GPUs, bringing big performance on the market with a relatively low price, working on Open CL to start supporting AMD gpus would be a better investment over working on Windows 7/8 version of Maxwell Render/Studio.


Sticking only to Cuda could be a backslash for your company. Especially on the long run with Amd increasing their market share.


4) New selection tool
especially when working on .obj files seen by Maxwell as a single identity, would be awesome having a selection tool to create new shaders/object group like in Artlantis Studio.

Actually you could select only by triangles in
Maxwell Studio. ( over object and UVs)
Having the possibility to select an object by:

Would decrease the time spent in other software especially when using some .obj not exploded previously to being imported.
MAKING studio a more useful tools.

Maxwell have an huge shaders library, but many of them are just old entries with low performance ratio.

Adding more shaders with high quality and performance ratio, would make easier for professionals just focus over modeling and setting up the scene.

Come on you don’t have a Mirror shaders in all your online library. No problem I created mine, but that’s hilarious.

Some rendering software give you the opportunity to drag and drop a texture directly inside the viewport.
It’s useful for example when you’ve to create easier and fast a Canvas for an interior rendering, or you don’t need an high quality shaders with bump and many levels of details.
You just drag the texture in, modify the size and the position of the texture and you’re done.

Multilight is a wonderful and saving time tool, so good chaos group decided to add something similar to Vray, directly inside
Vray. Check how your competitor work and do it better. In fact they’ve done the same with your Multilight.

You don’t have control over the denoise effect.
Denoiser sometimes even remove or “wash away” texture and details.

You could add inside Maxwell Render and Maxwell Studio ( even for FIRE ) a specific section with DENOISE options to modify the render when it’s finished.
And maybe on the fly too.

Denoiser from TopazLabs work much better then yours.

These are just the 10% of the ideas that could improve Maxwell Render in the near future.

Maybe even a collaboration with Evermotion to bring some high quality objects/furniture inside Maxwell Studio, would attract more professionals to your side.

Anyway, the new denoiser will have some of the things you ask. I don't have images yet, as we are still working on make the UI simple. But it will have the following functionality:

Advance parameters (denoiser)
With this parameters will be easier to control that it doesn't lose too much detail or be more aggresive againt noise.

Well, I will try to explain this without being too technical. Due to GPU having thousand of threads (cuda cores), and working per rebound, we have that some pixels end having more samples than others. So you ask for a SL 15, and the medium of the image is that, but you can have zones of SL 17 and other zones of SL 12. Usually the easier parts having higher SL. In the following image the more red higher the SL over the requested. More blue lower the SL, black means requested SL exactly. Darker is nearer to requested, brighter is farther. 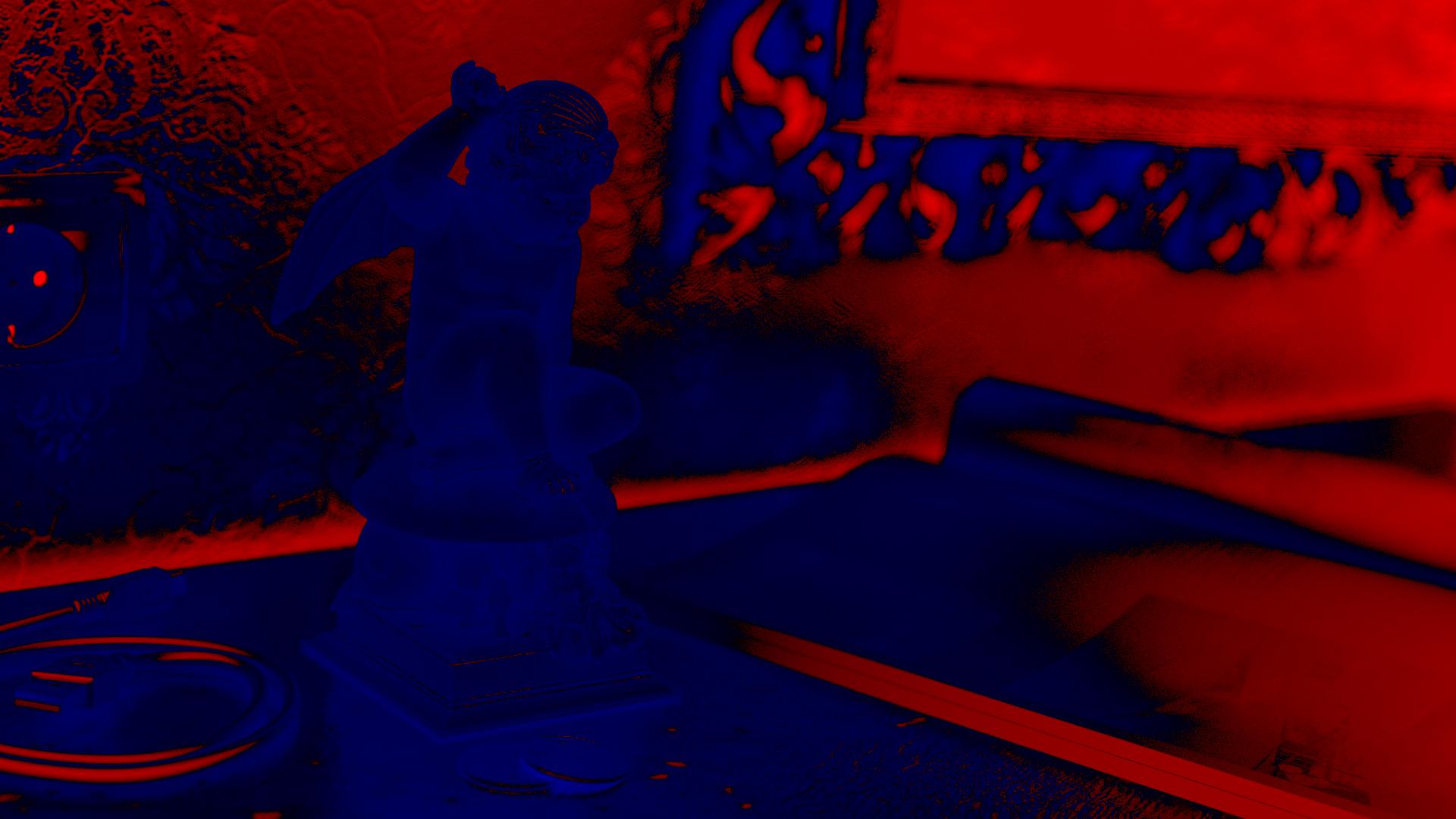 With GPU samples rebalance, threads can change pixel if they reached target to help other pixels. This improves the image uniformity. As you can see, the samples image is much darker now (we are close to desired), with a few pixels going red in the shadows. 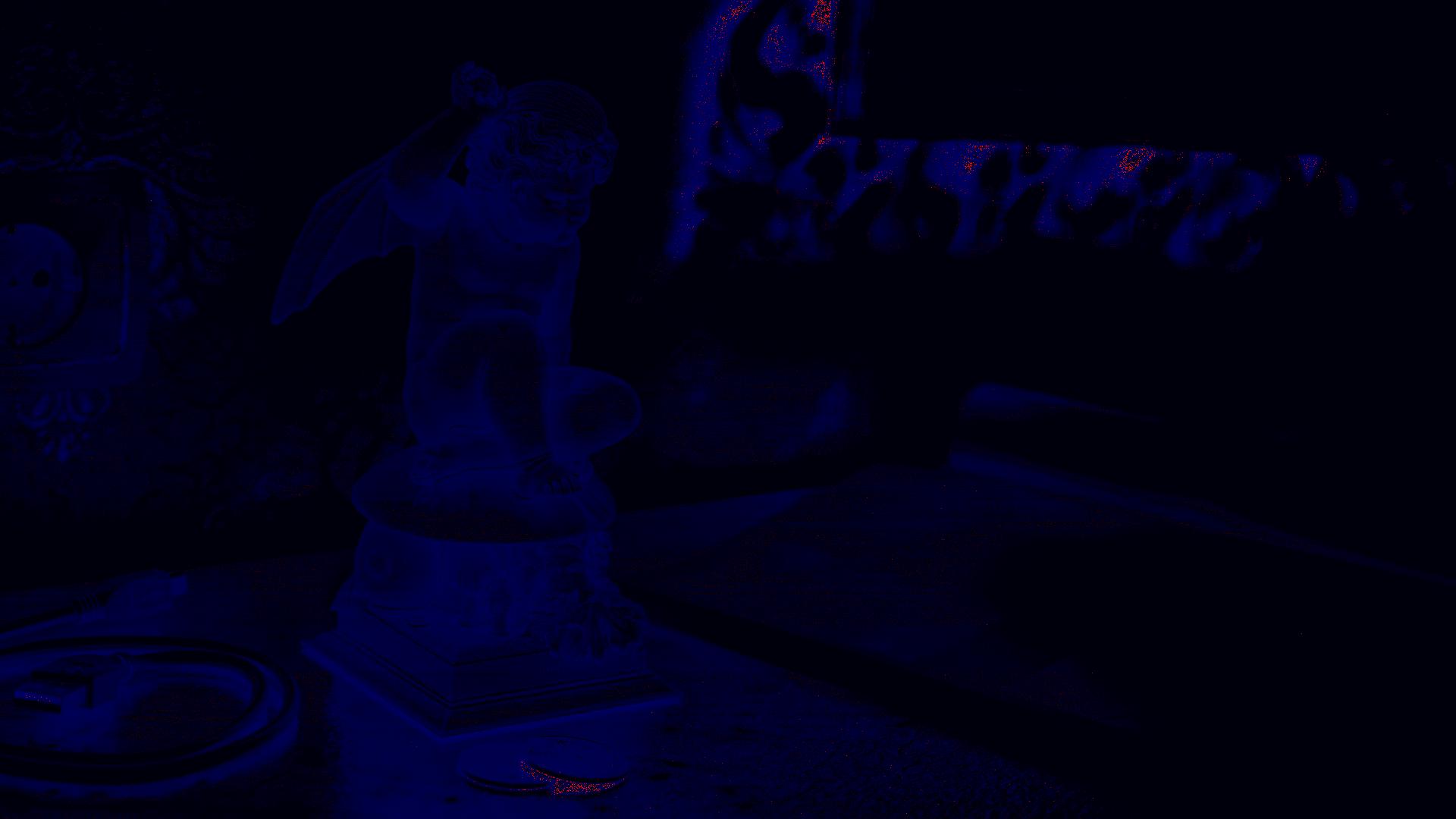 We are going to continue working on this, I think we can archieve a perfect black image, every pixel having the target SL. But there is still improvement on 5.2. This can make some scene going slower on gpu (not much in my tests), as we make more samples in the more complicated zones now. But renders have less noise in thiose complicated areas.

Running out of GPU memory on any simple scene over 3000 pixels on a 2080Ti I guess will still be a problem, but I do like to use the GPU render for draft images, usually at 1200x800. I then supply my client with 2400x1600 drafts using AI Gigapixel. Being able to suppress the firefiles with the denoiser will be key and a most welcome addition, as this is a real problem at the moment.

Regarding CPU rendering, currently I am running a very slowly failing, 10 year old dual Xeon x5650 (but very lucky with a good bin on both cpus) system and Maxwell is still usable for some final high(ish) res images. More often than not these days I use the Maxwell Render Cloud and it seems there has been a recent boost in speed of the nodes being used to render. Of course, any speed boost to the CPU side of things, especially with FIRE would be most welcome... DDR3 RAM I feel though is holding me back... I am however looking to upgrade to the newest Threadripper CPU at some point in the near future... Waiting for the 3 fives... PCI-e5 DDR5 and Xen5 ;o) So any optimisation of how Maxwell utilises large thread counts would also be most welcome. I'm sure it would even make a difference on my measly 12/24 threads in my current system.

Altering the DeNoise system from rendering 2 images to a single image is the biggest plus in my view.... I don't currently bother with this feature at the moment.

There is a performance improvement using multigpu in 2 gpu case. I detected something around 20% boost. Some testers have reported that now 2 GPUs are faster than 2x 1 gpu performance.

There still is still a lot to add to the GPU render engine. For example:
1. When there is SSS implementation expected? I think that massive computing power of graphics cards could utilize SSS effectively and the demand for that is in high priority for many of artists.
2. As well the same is for motion blur with deformations.
Will these features be available any soon?

Personally I'd put those at the highest priority along with:
3. Custom alpha channels.
4. It would be useful as well as I wrote long time ago if you added something like Multi-Extra Sampling levels that can be linked to different custom alphas.

NL can revert (partially) to the good old Maxwell 1,2,3 days: you got a whole bunch of plug-ins for your money. so I don't expect it again-and also don't really need it-other than the significant added value to a software bundle that helps you translate-correctly!-between DCC apps. imagine how much more value-for-money people can have when they can have a translation tool between the different 3d content they deal with, for NL it's already there- they make the plug ins anyway. so NL don't need to "sell" you all of those - just the very important and needed option to , say, buy Maxwell for Maya but have the option that it will know to read sketchup models or 3ds max models etc. (only render related 3D !!! not more). for me - and I know from about 15 years of reading posts in this forum- that also for many others - it is extremely valuable .
ahh....ahhh....ahhh......no !!

is there any idea, when you will publish V5.2?

luis.hijarrubia wrote: ↑
Wed Dec 02, 2020 1:34 pm
Features are closed and tested, we are testing plugins integration right now. It should be out before Christmas.

Hello, For some reason, the Mac version of Rhino[…]