ivox3 wrote:The actual processor information is still available if you hover the cursor over the icon -- which I suppose is alright, but I'd rather not have to.

I know know were a bit short on real estate, but there simply has to be a way to create a slightly less confusing and yet a more comprehensive chart.


Also: How about listing the # ? It helps when your trying to gauge where your entry is at...

Adrian ..... don't kill me for these ramblings. Your effort with this whole thing is noble(hats off to that !) -- I'm just wishing out loud.

I had implemented a very comprehensive popup that would show you all basic CPU info. Unfortunately this clashes with the current javascript implementation and is hard to get around. When showing the full list, the website/browser froze for 15 seconds before you could do anything.

I split Mac/PC because i think it gives more clarity, even if Intel PC / AMD PC seems redundant. I don't see any alternative to having that column, the old "Mac Pro (Xeon X5365)" was sketchy. I don't like the whole shiny Mac-mess anymore than you, but it's a big part of the Maxwell user base, and i have to cater to that too.

I could reintroduce a column showing the CPU's name as text again. I'll run some tests to see if it fits within 1280px (+ safety margin) wide, the most common res among visitors. Having people side-scroll big-ass lists is a no-no.

Motherboard would have to be an text-field, as opposed to a predefined list of models (simply too many). Since Benchwell started, it became evident that users don't supply useful information unless presented with predefined choices, so i honestly don't see this being worth it. If you're confused about i7 irregularities, you don't want this. The comment field can be used for additional hardware information if desired.

About the #, totally agree. I'd also definitely like to include it into the URL as i mentioned on page 1.

And keep wishing on loud, no worries. Let's hear it Could someone please try and put some sense to these i7 scores ?? They don't make a lick of sense ---- there's machines at 2.67ghz with 3gigs beating out 2.93ghz machines with 12gigs and all sorts of other discrepancies being shown.

There doesn't seem to be any consistency ---Theories ? Granted, they're all basically fast, but you would think that two machines with each running the same same basic hardware and OS, that the higher clocked machine would produce a faster time, ..yet, such is not always the case. What up ....

** Unless for ridiculous reasons that people aren't reporting accurately. As stupid as that is, I'd almost prefer that to be the case, because trying to understand the hardware discrepancy is messing with me.

Could be false reports; I'm relatively powerless against that, though i already reject like one in 3-4 entries.
Could also be hidden performance boosts like better memory timings, a slimmer OS (background tasks), setting render priority from low to high. I decided on the default priority to be low, because it's imo the common way to render, and because i want to show the taxing effects of different OS environments.

Don't worry too much about it, the i7 is simply great Something like this might be doable with selective font-size reduction. If i would compress the Memory column and make that a popup column, it would obviously safe a lot of space. The Processor column needs to remain this long as the useful credentials are at the end of the processor name. Note that the ID field is dependent on the way you sort the list. If i used the User_ID it would make the field obsolete, because then you might just as well search for your user name.
If you wish to make an apple pie from scratch, you must first invent the universe
-Carl Sagan

For me mobo info not a factor...just an fyi.

Popups not working on my system....

Out of curiosity, what OS/Browser?
If you wish to make an apple pie from scratch, you must first invent the universe
-Carl Sagan

Popups not working on my system....

Out of curiosity, what OS/Browser?

Anyway, i'll semi-revert the design so you don't have this problem anymore. I hope to find a reliable, faster way to get comment popups working, opening them in a new window is so web 1.0, so i'd rather not

what I don't understand is, Bubinga has 4m05s and a score of 2625.43 - is there anything wrong with the calculation of the Benchwell score? 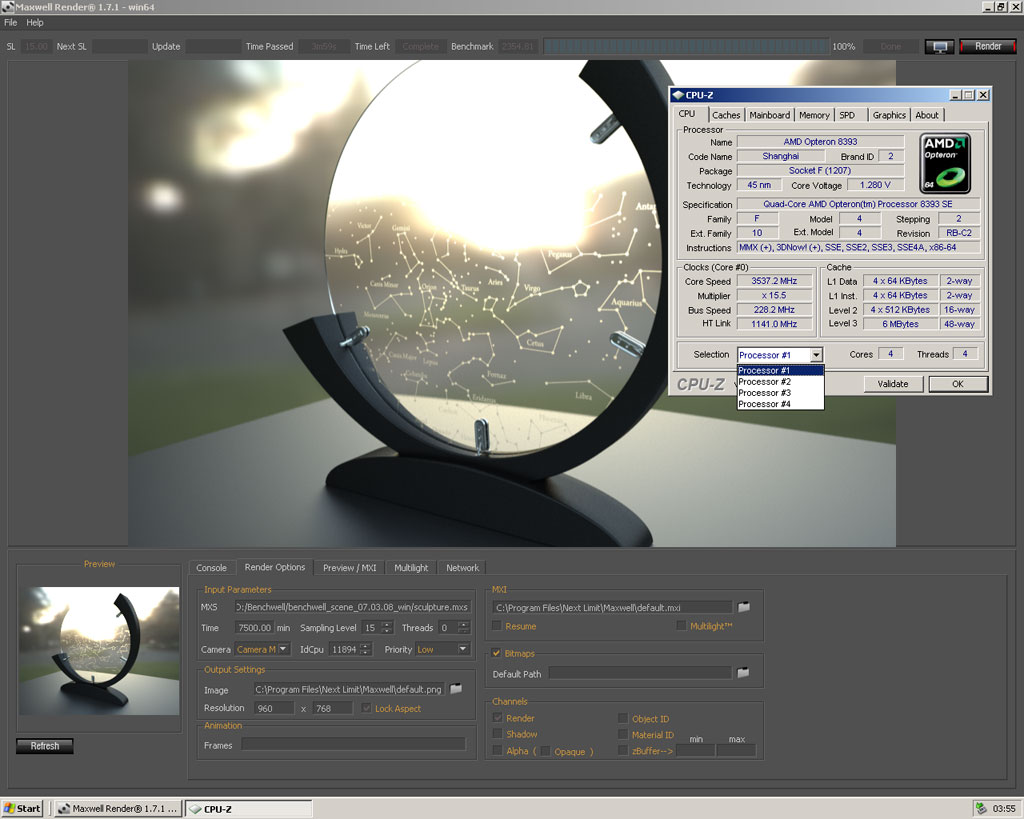 cgbeige wrote:is your machine overclocked? I don't know about that machine but when I ran my older Mac Pro overclocked, the system clock went out of sync.

By -Adrian -  Sun Aug 30, 2009 10:09 pm
-  Sun Aug 30, 2009 10:09 pm #306653
Bubinga back then was by far the fastest, so i had no way of comparing. With equally fast results coming in recently, it doesn't line up anymore. In my experience the the time/benchmark ratio is very stable, the huge M~R 1.5 list showed that as well. So i think human error or exotic setups are the reason for the occasional odd result.
If you wish to make an apple pie from scratch, you must first invent the universe
-Carl Sagan


-Adrian wrote:...So i think human error or exotic setups are the reason for the occasional odd result....

Hello Mike, I'm not sure what you are doing with […]

Hello Mike, I'm sorry for the late reply. I coul[…]

Hello! We have just released a new version of the[…]