Everything related to Studio
Reply

By Andreas Hopf -  Tue Feb 02, 2021 10:21 am
-  Tue Feb 02, 2021 10:21 am #400460
1. After a while, when replacing an old texture with a new version, the old version is still shown in the Texture Picker and also in the enlarged preview when clicking Switch display size, while clicking the Full size button shows the new version as expected. In FIRE and when rendering the Viewport, neither the old nor the new texture is rendered.

After quitting and restarting MS, and manually moving the projector away a fraction and then back to its original position, the issue goes away, but re-occurs later. 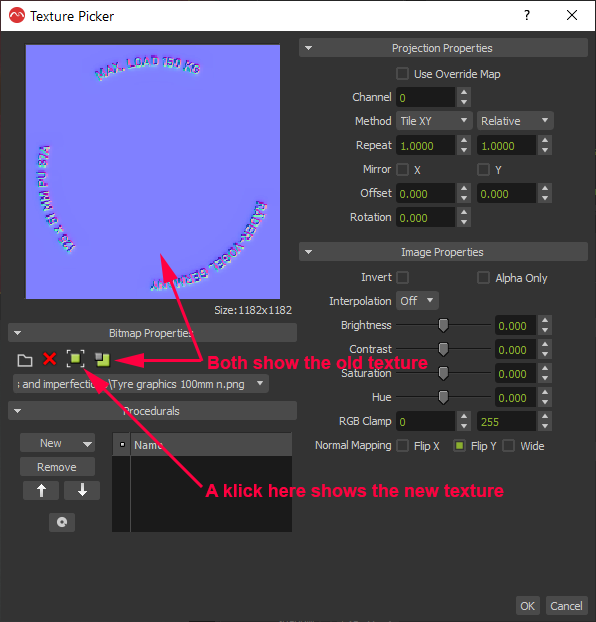 2. While typing into a MATERIAL EDITOR field, for example to rename a material, while autosave comes on, MS crashes.

3. When importing OBJs, and the Import Options modal window pops up, selecting Rename the new one and then selecting Apply to all has no effect; each OBJ requires a click on Apply.

4. When several objects are selected, and the mouse pointer is in the VIEWPORT, pressing C does not center the view (like in Maya, where the mouse pointer hovering over a window is sufficient for an action pertaining to that window). One has to click inside the VIEWPORT to "activate" it - the problem is that that action inadvertently selects other objects and not the ones one already had selected.

5. When selecting Meters and typing in X and Y values for the real world size of a texture map and then selecting Normalize to set a UV set's cubic projector to real scale, one gets a green 1 x 1 x 1 meter cube aligned to a corner of the object's bounding box in the viewport to indicate that it is real scale. However, when using a planar projector to do the same, one gets a green plane in the viewport at an arbitrary size in an arbitrary location. This is not intuitive and confuses the novice; one would expect a 1 x 1 meter plane displayed, aligned to a corner of the object's bounding box.

6. With real scale textures, the Textured decal viewport preview display is wrong, while it renders correctly in FIRE and in renderings. This makes placing the texture interactively very unintuitive and cumbersome. 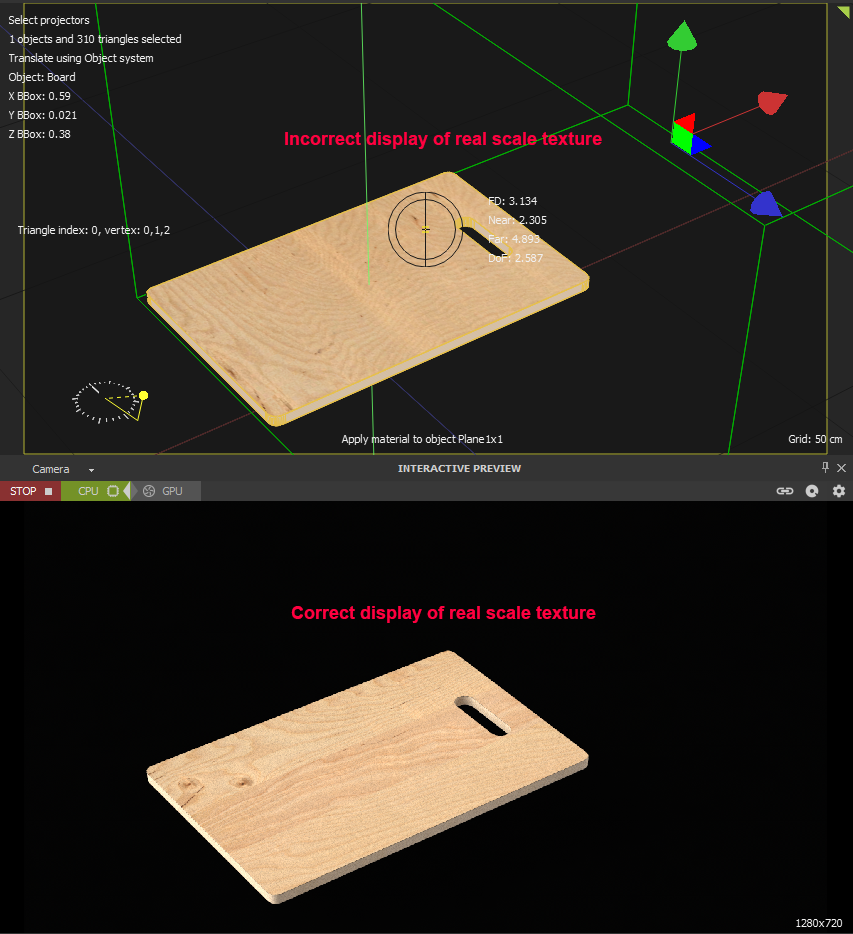 7. When using a HDRI for Refraction, Reflection and Illumination, but not for a Background, one cannot specify a background colour or gradient (always black). Also, if mapping the weight of a ground plane with a circle procedural texture from white to black in order to make it blend into the (always black) background, the visual boundary does not fade to the background, no matter what sharpness is used on the circle procedural. 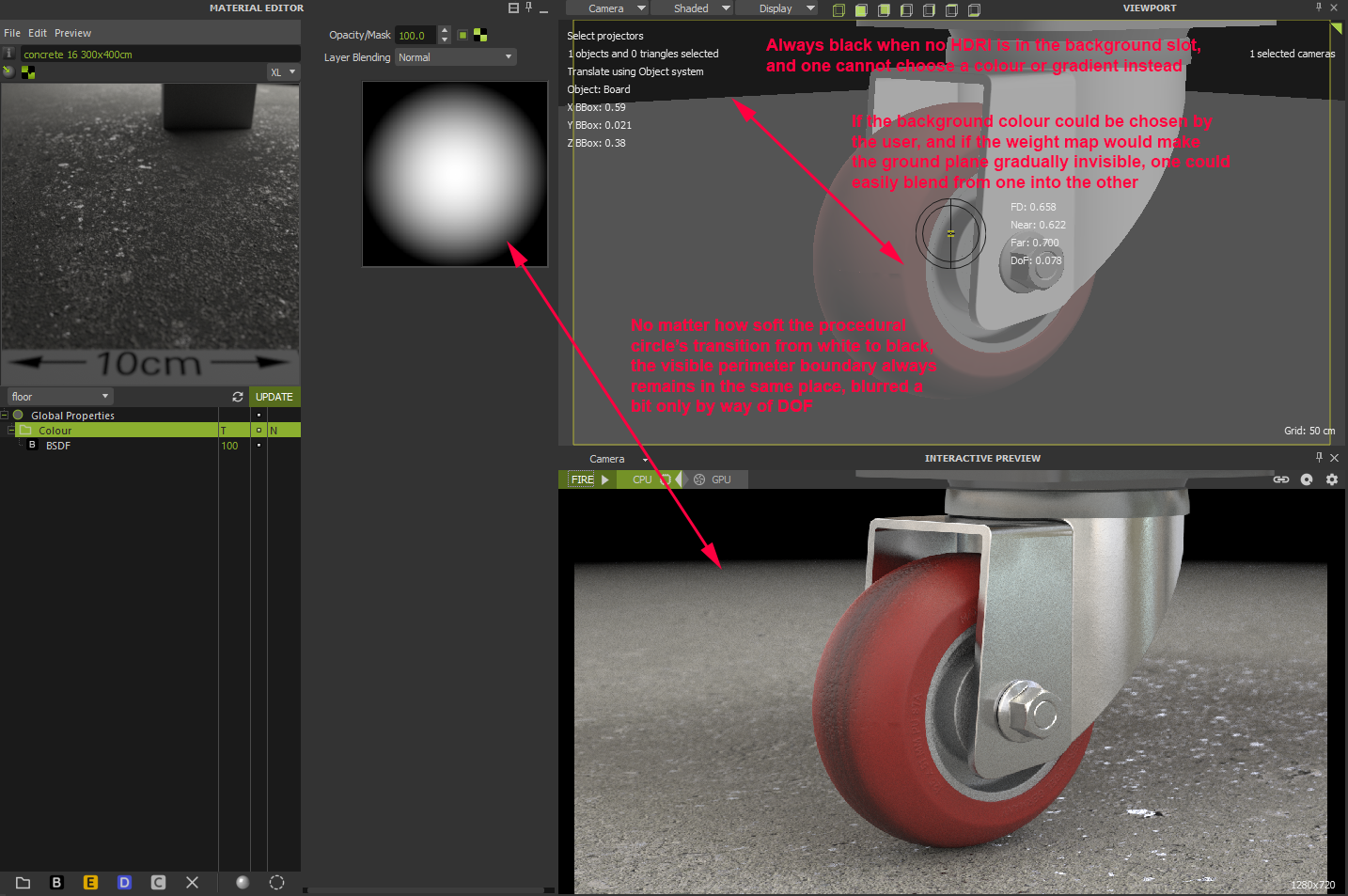 8. When a scene is open, and some of the textures used in its MXMs are moved to another location, File > Fix Texture Paths does nothing when pointed to the new location.

9. On many objects, triangle selection does not work properly. Only the Paint (F11) mode works without selecting triangles on the back of the object or random triangles or none at all; however, the paint mode does not work with dragging across multiple triangles to select a strip of them at once - each triangle has to be explicitly clicked on. Confusing for student novices, the different selection modes are not explained in the manual.

10. On university network installations and upgrades, CPU FIRE is enabled by default; FIRE then will not render, for example, SSS or single-sided SSS, which is very confusing for the novice, thinking certain materials are bad when in fact they are not. CPU should be disabled by default.
Last edited by Andreas Hopf on Mon Feb 08, 2021 9:37 am, edited 1 time in total.