1. When selecting the Same As Background setting, the previously loaded HDR image remains, so one has to load each slot manually, which defeats the function's purpose
2. When opening a file with a texture missing or relocated, one is asked to locate the original/a replacement three times per missing texture, although the texture in question is used only once in one material in a single slot 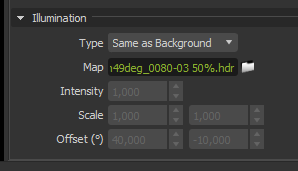 Same as Background should change the map to the one loaded in Background, but it does not.

Hello, For some reason, the Mac version of Rhino[…]